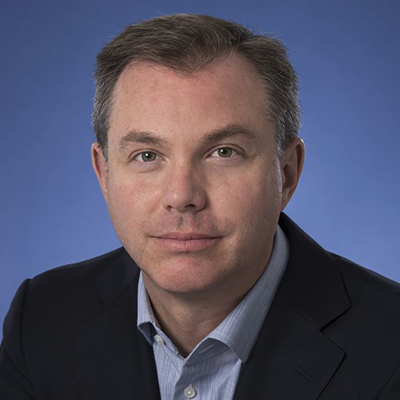 What if you could truly repair a damaged heart? Treatments for heart disease focus on alleviating symptoms or slowing damage but no regenerative therapy exists. With heart disease killing 12 adult Canadians every hour, it is the second leading cause of death in this country.

Dr. Michael Laflamme, a clinician-scientist based at Toronto General Hospital, and Associate Professor in the Department of Laboratory Medicine & Pathobiology, wanted to find a solution for patients so investigated a way to use stem cells to regenerate hearts.

Fascinated from his medical education days with cardiomyocytes, the cells that make your heart beat, he wanted to find a way to help them regenerate after being destroyed during a heart attack.

When you suffer a heart attack the blood flow is restricted to parts of the heart. Where this happens, the heart cells, or cardiomyocytes, die and are replaced by scar tissue. The more scar tissue you have, the more pump function you have lost, and many patients go on to develop heart failure, an often lethal disease. Until now, there was no known way to replace the lost heart muscle, other than a heart transplant. 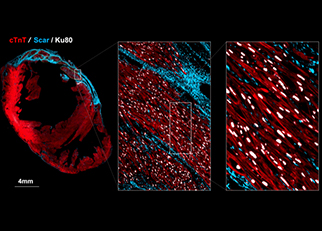 Grafted cardiomyoctes in an injured heart where blue is the scar tissue Dr. Laflamme has spent almost 20 years developing a process to use pluripotent stem cells, stem cells that can develop into any kind of cell in the body, to create new cardiomyocytes and injecting these into the heart where they can replace scar tissue.

He was among the first to grow cardiomyocytes from human pluripotent stem cells and transplant them into rodent models as a post-doctoral fellow at the University of Washington. “I was first interested in developing therapies for heart muscle and failure. If you had told me 20 years ago I’d be a stem cell biologist, I would have laughed,” says Laflamme.

It has been a long journey with many stages of development, but the team is now in the final stretch of testing before they can go to human clinical trials. The process of translating the idea of using stem cells to develop a therapy for heart failure patients has encountered many challenges, which he, and his collaborators, have systemically worked through.

First was the scale of production. “During a typical heart attack, you lose roughly a billion heart muscle cells,” explains Laflamme, “so we had to be able to produce large quantities of cells in an efficient and economic way.”

With colleagues including Dr. Gordon Keller, also at the University of Toronto and the McEwen Stem Cell Institute at University Health Network, they successfully transferred this process to industry, as this scale of cell manufacturing is extremely challenging in an academic environment. They were co-founders of a start-up company to commercialise production and help support the continued research to develop a viable therapy. It was capitalized with what was then one of the largest-ever Series A financings in biotech history.

Such an industrial partnership was needed, explains Laflamme, “because getting funding and support for the transition from basic science to therapy is a challenge. Bodies like NSERC and CIHR will typically fund the discovery phase, and pharma companies are often involved in late-stages like clinical trials, but there is often what we call ‘the valley of death’ in between.”

Dealing with the immune system has been another challenge for the research.

Although the immune system probably won’t attack this single-cell therapy as aggressively as an organ transplant, which involves many types of cells, they are still seen as foreign by the body. “We hadn’t initially realized how challenging this would be and we didn’t want to just rely on immunosuppressant drugs, so we, and our collaborators are exploring other options.” Says Laflamme.

The biggest hurdle Laflamme faced was arrhythmias, a problem with the rate or rhythm of the heartbeat. This is something they didn’t see until large animal studies, and it has taken several years for Laflamme and his laboratory to understand the problem and formulate a solution. The new heart cells were essentially running to a different beat than the recipient heart cells and driving an abnormal rhythm for the first few weeks following transplantation. The observation that the arrhythmias went away over time was a clue for a potential solution.

“The cardiomyocytes we were producing were less mature - more like those you find in an early developing heart,” he explains, “We need these cells to find the beat, not to drive and change it. We’re seeing very promising results when we use cardiomyocytes with more adult-like electrical properties.”

Being so close to human clinical trials is an exciting and rewarding moment for Laflamme.

“My goal was always to find a therapy for patients and this journey from the basic science to this point has been an incredible, albeit long one!”

He believes that translational research is a matter of mindset and what your end goal is.

“It's a natural role for pathology. We sit at the interface between clinical practice and basic science and understand the fundamentals of disease. I believe we are the mediators of that meeting of the minds and need to support people willing to operate at that interface.”

In the meantime, should you venture into the Laflamme lab, you will see an interesting sight. “We needed to see that the cells could fire in synchrony with the rest of the heart when transplanted. To demonstrate that we engineered cells that flash green light every time they fire so you can see it with the naked eye. We have flasks of flashing, beating heart cells - it's the world's most expensive lava lamp”.

Heart disease in Canada on the Government of Canada website

Why we teach to unlearn: the non-traditional path of translational research